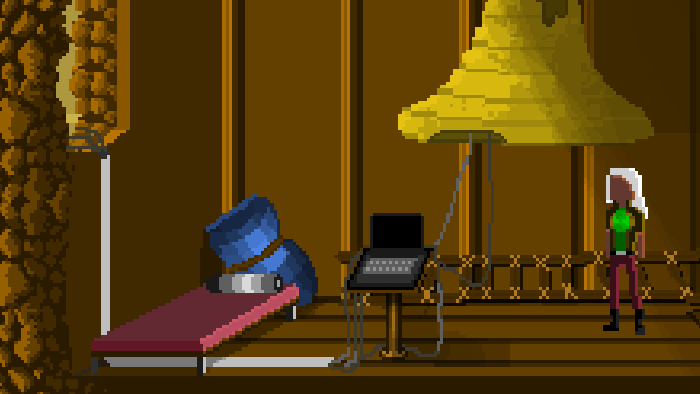 Download The Fickle Hands of Fate from the AGS Games Database

The Fickle Hands of Fate is a short single-click point and click adventure game.

Fate is finalizing her last recording in the steeple of an abandoned church in a village she is about to leave.

Then, off to another city and another recording: her search is not over yet.

This time I went solo, and tried to develop it all by myself. I had an idea for a single-click, rather than the lately-common two-clicks, interface and went to release something trying to make use of it.

I tried to delegate to an on-screen popup what usually is told by the main character whenever examines an hotspot or objects. The results appear as per this in-game screenshot

The idea behind this was to implement some sort of “stream of consciousness” rather than an out-loud description of what the character sees.

The game itself is quite short but I’m pretty happy with what I have been able to achieve, also graphics-wise, which usually is not my forte.

Finally, I was able to play some guitar and record few tracks to put in the game. That helped me a lot in the process of coming up with the characters and the overall mood.

What you see in the game is actually a pretty small portion of what I had in mind, therefore I’m planning to build up from where I left!

None yet! Did you write one? Send me your review!